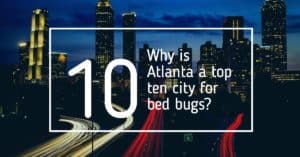 Why is Atlanta a top ten bed bug city?

Bed bugs in Atlanta, Georgia and it’s metro area have been on the rise since the late 1990’s and early 2000’s. Many factors contributed to the rise of bed bugs as a pest again. Some factors include increased international travel and how pest control is performed.

Starting in the 1980’s pest control companies started going away from baseboard spraying. That is when the technician sprayed where the wall and floor met in every room. A new way of treating called Integrated Pest Management (IPM) came on the scene. IPM is the killing of the pests using targeted applications or structural modifications such as sealing up holes. This is what is used today. Baseboard spraying killed insects as they walked over the pesticide but also exposed people and pets to it also because it was not placed inside a crack or crevice.

International travel also increased and with it brought bed bugs back into the mainstream. Bed bugs never really disappeared but were always prevalent around the world.

Atlanta is an internal hub for travelers from around the world. The northeast has been hit the hardest by bed bugs for a host of reasons including more apartment-style living. Through travel, relocation, and people generally moving around bed bugs have been brought to almost every city in the US.

Moving up the ranks since 2010

Atlanta has been steadily moving up the list of most bed bug-infested cities since 2010. In the last 10 years, Atlanta has gone from 24th in 2010 to 10th in 2019. People do not like to talk about bed bug infestations that they have had. It not a dinner party conversation. Getting bed bugs is not anyone’s fault but rather just a little bad luck. The list below shows how Atlanta is increasing in the number of bed bugs it has. That means you do a higher chance of knowing someone or being that person that has had a bed bug infestation.

Living with Bed bugs in Atlanta

Living with bed bugs is not something you have to do. Searching the internet you will find DIY tips and tricks, bed bug treatment kits, instructions for washing your clothes, and lists of people telling you to throw out all of your furniture.

Bed bugs do not go away on their own. Atlanta is moving up on the list of the top cities with bed bugs. Being proactive in the beginning of an infestation makes the experience a lot easier.

You must be proactive and have a plan to eliminate bed bugs from your home. If you have been trying to do your own bed bug pest control and have not had any success then let us help you.

Get answers to your bed bug or termite issue. 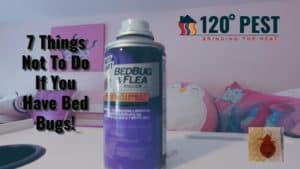 Seven things not to do when you have bed bugs

Seven things not to do when you have bed bugs 1. The first thing you shouldn’t do is panic. Bed bugs can be controlled with 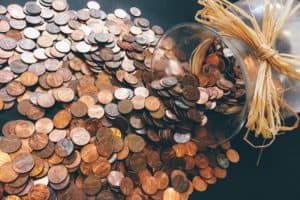 How Much Does A Bed Bug Professional Cost?